As written by Scott Willoughby in the Vail Daily

For better or worse, most of us don’t remember the Eagle River Valley before Interstate 70 ran through it. Beyond all the talk of Vail, Beaver Creek and the surrounding attractions, that ribbon of pavement is what physically brought almost all of us here.

The reality is the highway brought some baggage along with it as well. Roads, like railroad tracks, tend to run alongside rivers in the mountainous terrain of Colorado, where the valleys are broader and the ground more level. But of course, that’s not always the case. Sometimes even rivers need to be rearranged in the name of progress.

Such was the scenario in the town of Eagle, where it turns out that one of the biggest hazards on the lower Eagle River was created when I-70 was built decades ago. The notorious Rodeo Rapids, just upstream from the Eagle County Fairgrounds, are largely the result of the river being unnaturally rerouted to make room for the highway. Consequences range from flipped rafts and life-threatening swims to impaired fish passage and outright avoidance of the river by recreational users of all types.

“It’s not a healthy, natural river right now. When the interstate came in, the highway department altered the course of river, shortened its course, and the river is still struggling to reach equilibrium with that move,” said Scott Shipley, a three-time Olympic kayaking competitor turned river park designer from Lyons.

Shipley has been making regular trips to Eagle since his company, S2O Design, was contracted by the Town Board to help design portions of the town’s ambitious Eagle River Corridor Plan last year. He was greeted by a packed house at Eagle Town Hall earlier this month eager to discuss the past, present and future of the Eagle River as envisioned through the collaborative efforts of the local community, town staff and Colorado Parks and Wildlife, among others.

Shipley’s experience as a river park designer with a master’s degree in mechanical engineering aside, he’s a family man from a small Colorado town rooted in recreation and tourism. Such perspective combined with credentials that include creating canoe and kayak competition venues at the 2012 Olympic Games and the U.S. National Whitewater Training Center in Charlotte, North Carolina, along with river parks in Durango and several other sites, uniquely qualifies him to tackle the in-stream enhancements proposed within Eagle’s broad-scale, community-oriented park.

The concept for the 300-acre park encompassing nearly 3.5 miles of the Eagle River includes riverside trails for hiking and biking, grassy lawns for lounging, bathroom facilities, pedestrian bridges linking to downtown Eagle and a promenade with utility hookups. Beaches and terraced boulder banks will overlook as many as four wave features spanning 850 feet in the heart of the park, accompanied by slackwater eddies to provide safe havens for swimming, fishing and splashing with kids.

Upon voter approval, the park will be built in phases that begin with transforming the current dirt truck parking area visible from I-70 into the core community park and access point for in-stream features as soon as spring of 2017. In a town seeking to establish its identity as a destination for recreation, the park will serve as its calling card.

“I think it will be a great thing for everyone — fishermen, boaters, families. It will open up a section of river that nobody uses right now and bring more people to town,” said John Packer, an Eagle resident and owner of Fly Fishing Outfitters in Avon. “Right now it’s basically a muddy truck stop with a whitewater hazard in the middle of it. But it could be a really great spot for families and members of the community to gather and enjoy a beautiful river with a beach and a nice takeout.”

Perhaps even more significant is the opportunity to remedy the mistakes of the past, including the poorly considered rerouting of the river at Eagle when the highway was built. That jagged segment has degraded even further with a series of dilapidated diversion structures that have been haphazardly rebuilt over time.

“Right now, the river through there is marginal at best,” said Craig Westcoatt, Colorado Parks and Wildlife’s wildlife manager for the area. “It was re-channeled when I-70 went in and suffered from a lot of impacts. Mistakes were made trying to fix things and that had impacts on passage for fish, among other things. This is a chance to clean up some older mistakes and make the river better with the potential to be good for everybody.”

If there’s an upside to the troublesome realignment, it’s that the river’s proximity to the busy highway now offers an outstanding view of what may soon come to be the new and improved gateway to the often-overlooked town of Eagle. In essence, the community has the chance to turn the impacts of interstate construction into an opportunity to enhance its brand as an outdoor recreation destination by creating a lucrative roadside attraction unlike anything in the state.

“Eagle is a wonderful town, but that’s not reflected in the view you see from the interstate,” Shipley said. “There are very few places on this drive where you have an opportunity to see whitewater from the interstate like you do at Eagle. What I believe is that if you create a park that’s visible from the interstate, that has whitewater and excitement around it, you’re going to see people start getting off the interstate like they do at Shoshone in Glenwood Canyon, and that can generate significant economic impact for your town. It’s a tremendous attraction and this portion of the Eagle really has unparalleled potential as a river park.”

The town of Eagle is hosting an informational panel discussion, Communities Transformed by Their Rivers, at the Brush Creek Pavilion on Wednesday at 6 p.m. Representatives from Salida, Buena Vista and Golden will be on hand to discuss how their communities have benefited by improving the connection to their rivers. The entire Eagle River Corridor Plan can be viewed online at www.townofeaglerivercorridorplan.org.

Scott Willoughby is a longtime local writer, editor and photographer. 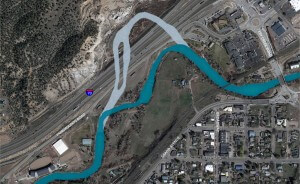 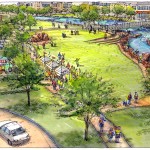 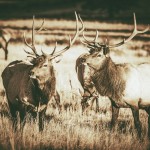