Hunting season is upon us! Amazingly enough this happens every year but people are still surprised.  What should be remembered is that hunting seasons are fairly consistent from year to year as far as starting dates and lengths of time the seasons last but that they are set by the government, the Colorado Parks and Wildlife Commission, so there always seems to be something slightly new and different. Ever hear that phrase – we’re from the government and we’re here to help? Well in this case the intent is true but that doesn’t lessen the confusion. Here is the information that probably pertains the most to recreation and trails enthusiasts that might encounter hunters:

Archers need to get closer to their prey so they are not required to wear the bright daylight fluorescent orange clothing. The remainder of the big game hunters you see should be dressed with at least 500 square inches of that bright color.

Be aware that there are other licenses which are out there that do allow hunting to occur outside these dates. Most of those are limited to private property but even then there are some exceptions. What good would regulations be if they didn’t become so convoluted that they were difficult to understand? Best information I can provide you is if you see something that appears strange occurring outside these dates, contact your local dispatch center and pass the information on. 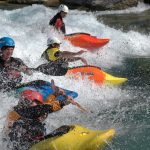