What’s up with all the badgers?

I guess I should feel pretty lucky for having run into 4 large, and very cool looking, badgers the other day on the Haymaker Trail. Apparently, it’s pretty unusual to see badgers out during the day and in groups, so if it happens again, I’ll take Craig’s advice and “respect their power and enjoy the moment.” And, take a picture!

Living with Wildlife: What you need to know about badgers

Badgers in Eagle and all of North America are solitary, unless they have dependent young or during the breeding season of late summer or fall, and are primarily active from dusk to dawn. This is not to say that badgers are never out during daylight hours, particularly females with dependent young. Like any good parent she will do whatever it takes to feed and spend time with her offspring. This means while the kids, known as cubs, are in the den during the day she is may be out hunting to feed them and then with the cubs during the night when they are most active. Badgers are active year round, that is to say do not hibernate during the winter. They do really slow down and enter into stages of torpor, a physiological slowing of the entire body, for short periods over the winter. However you may see a badger or their tracks out scavenging for food during the winter when much of their diet consists of carrion.

Badgers are semi-nomadic creatures moving around to different areas in search of prey. These means that often there are a series of holes and dens used by a badger within its territory. This is one issue people have with badgers as the holes are large and may cause issues on roads, trails, ditch banks or in yards. Equestrians are concerned about their horses stepping in holes, recreational users are inconvenienced or worse upended or jostled by a large hole in the middle of a road or trail, agricultural users can see a ditch diverted and emptied of water, and homeowners surprised by a newly excavated mound of dirt and a hole in their yard. Yet for this detraction, badgers are an important predator of small borrowing mammals, what most of us refer to as pests, and an important part of the ecosystem.

These animals are considered to be the premier “diggers’ of the animal kingdom. Primary food sources for the badger are ground squirrels, voles, pocket gophers and any other small mammal.  The badger obtains their prey by digging them out; all the while their eyes are closed or actually protected by a third eyelid so they are relying on their smell and hearing to guide them toward dinner.

Badgers have been made a villain because of their looks, the masked face, long claws and large incisors, and habits, flattening their bodies, hissing and growling if approached to closely with no avenue of escape. This misconception derives from the ferociousness of the badger and some mythology. When threatened the badger is a formidable foe that will face danger, bar its teeth and make menacing noises while at the same time often digging a hole with its back feet so it can escape danger. The badger is unique in this capability of digging a hole and disappearing underground while facing an opponent. However, the badger is a non-aggressive foe for humans. With all their feral looks and sinister appearance they are actually fairly harmless, unless you are the one that just stuck their foot in the badger hole. No they will not charge and bite you but the twisted or broken ankle will probably be enough to alienate the creature.  That is not to say they do not deserve our awareness and I am not advocating for “pet a badger day” but they are not wanton biters, attackers, and killers of children and people. These are wild animals and like any wild creature if they feel trapped and they have no avenue of escape they are dangerous very capable predators with big teeth and sharp claws.

Holes may be filled in, but you will not trap the badger; remember these are premier excavators capable of digging through almost any surface. The badgers will move on when food becomes scarce. Patience will usually be rewarded. As with all wildlife, provide the animal with an avenue of escape if encountered, respect their power, and enjoy the moment; you may be one of the few that have actually had this wildlife experience. 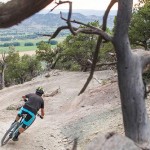 $70k in trail work for Eagle this summerBlog