Singletrack Sidewalks, the brainchild of Mike McCormack of Eagle, has garnered the Town numerous articles in national publications, including these features in Dirt Rag Magazine, GrindTV, Outside Magazine and more.

Although Bentonville might be the largest and most complete singletrack program in the country, there are smaller-scale efforts that you can look to as examples. In Eagle, Colorado, a much more low-key use of public dirt is being proposed, but will still be a fun diversion for kids (old and young) commuting. Mike McCormick of Breck Epic fame was inspired to take advantage of the stretches of dirt that line the paved path leading to his kid’s school, after watching how much fun the kids were having taking the social trails off to the side. For McCormick, it sparked the realization that his kids can’t be the only ones who could benefit from such play.

In 2012, McCormick started talking up the idea with other riders and soon started working with the local club, Hardscrabble Trails Coalition, and Momentum Trail Concepts, a local trail- building company, to approach the Eagle town council and propose “Singletrack Sidewalks.” The citizen-led effort gained traction quickly because it tapped into a feeling of “let kids be kids” while not asking the town government for any hard-to- find funding. Last November, the council approved the plan unanimously, and now the community is looking at moving dirt this spring. Over the course of the next five years, the goal is to connect seven different neighborhoods in town with the two school buildings as well as the various trailheads, opening up a much larger world for all. 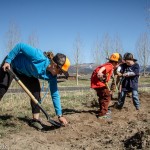