Once again, the Eagle Town Park is the place to be on Thursdays at 6:30pm throughout the summer as Bonfire Brewing’s ShowDown Town Free Concert Series returns June 29, 2017. The

Once again, the Eagle Town Park is the place to be on Thursdays at 6:30pm throughout the summer as Bonfire Brewing’s ShowDown Town Free Concert Series returns June 29, 2017.

The Town of Eagle and Bonfire Brewing presents this popular weekly event with the free music supplemented by a host of kids’ activities to keep the whole family entertained! Picnics are welcome for these laid-back community inspired evenings.

Satsang is a Conscious Music Collective made up of Drew McManus (Guitar/Vocals) Karl Roth (Bass, Keys, Vocals, Weissenborn) & Keller Paulson (Drums/Percussion) As well as an ever growing and rotating group of multi instrumentalists including David Cleaves. Blending world conscious lyrics with a unique blend of Reggae, Folk and Hip-Hop, Satsang seems to have something for every musical palate. The lyrics come from and are rooted in change, growth, awareness, and imperfection, and are used as a mission statement for reflection and activation. Touching on everything from; the bliss of traveling and the growing pains of change, to the ills of the justice system and environmental encroachment. The live show is everything that the band name suggests: A gathering of people to assimilate and share their truths. The reggae rhythms put forth by the band keep everyone on their feet, and the lyrics leave them craving active and immediate change. Satsang has toured all over the country and has shared the stage with the likes of Steel Pulse, Nahko and Medicine for the People, Trevor Hall, Chris Berry, Mike Love, Jon Wayne and the Pain, Tubby Love and many many more.

A bombastic burst of blues, roots, and rock

Three decades from now, a documentary filmmaker in search of his next rockumentary will come across The Broadcast and realize he’s hit gold. The story of the rock and soul outfit not only comes with its own high-octane soundtrack, it hits on all the key points: Challenges are overcome, miles are logged, performances are slain and an oft-jaded music industry is enticed. There’s dancing. There’s a love story.

Over 50 years ago, Bob Dylan traveled—as many would after him—from the American heartland to New York City, singing his way to the stage at The Bitter End in Greenwich Village. For Caitlin Krisko and her band The Broadcast, the story began at The Bitter End and wound up in the Blue Ridge Mountains. Like Dylan in reverse, lead singer Krisko grew restless in the city that never sleeps and dropped everything to move to Asheville, N.C., in 2010. It was there Krisko met guitarist Aaron Austin spending the next couple of years working as a songwriting duo releasing their debut LP, Dodge the Arrow, in 2013 (recorded at famed Echo Mountain Studios with LA producer, Eric “Mixerman” Sarafin). The record was an exploration of “bombastic, larger-than-life” sounds which went on to sell over 10,000 copies independently and ranked #4 on the college radio charts.

With maturity came the desire to explore something more grounded— something rooted in the Americana sounds of their new home in Appalachia. By 2014, shifts in personnel and objective led to some serious soul-searching. It was around that time that Krisko’s relationship with guitarist Aaron Austin evolved into a romance. Despite being from vastly different backgrounds — Austin grew up in the farmland near the Outer Banks — they began co-writing and found a natural partnership.

In 2015, The Broadcast got “the call” from producer Jim Scott (Tedeschi Trucks Band, Tom Petty), and the band began recording their sophomore effort, From the Horizon, which was released in June to rave reviews from Relix Magazine, Paste, and Live for Live Music. From The Horizon embodies a new sense of home, comfortably seating The Broadcast in the company of their Americana contemporaries. With a mix of soul, blues and classic rock arrangements, The Broadcast has shared stages with Mavis Staples, John Prine, St. Paul & The Broken Bones, The Wood Brothers, Brandi Carlisle, Keller Williams, Nicki Bluhm & The Gramblers, George Porter Jr. (Funky Meters), Betty LaVette, Charles Bradley and Holly Williams, among others.

Talia Keys is a force to be reckoned with! As a genre crossing multi-instrumental “musical powerhouse” – SLC Weekly, she authentically performs and writes her brand of soul-funk-rock n’ roll. Infusing unique vocal stylings with a storytelling hip-hop flow, while sourcing energies largely compared to the bluesy rawness of Janis Joplin and the fire of Jimi Hendrix. Synergizing that old soul vibe to new school beats. Best described by Katie Bain as “blistering.” Having been “struck by her talent, stage presence and refreshing candor.”- Insomniac: 2014 Best of Electric Forest.

Making a name for herself in music and now film. Talia is proud to be featured as “a new face” for Salt Lake City’s tourism campaign, SKI CITY. Licensing her original song “Me”, introducing the campaign as well as singing, playing guitars and drums through out their commercial. You may have seen it previewing for Warren Miller’s 2016- Here There and Every Where, on-line winter sporting events and select cable networks, to name a few.

Based out of Salt Lake City, Utah, Talia entertains locally, nationally and in Europe. Playing solo, she’ll live loop electric guitars, synthesizer, drum machine, beat-boxing and vocals for her one woman band, GEMINI MIND (evolving since 2010). Performing with TALIA KEYS & THE LOVE (band est. July 2015) she’ll front as lead vocal/guitar (or lead vocal/drums when Dave Brogan is drumming for ALO, Incidental Animals..). Both projects perform all originals, a mix of originals and covers or a full on tribute show with THE LOVE (Bowie/Prince 2016, Michael Jackson, Woodstock 1969, Grateful-Dread, 27 Club).

Most recently, TK & THE LOVE rung in 2017 with a special sold out Women Who Rock show, then Talia’s GEMINI MIND was featured as an official artist of The Sundance Institutes 2017 Sundance Film Festival. 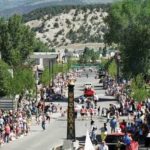